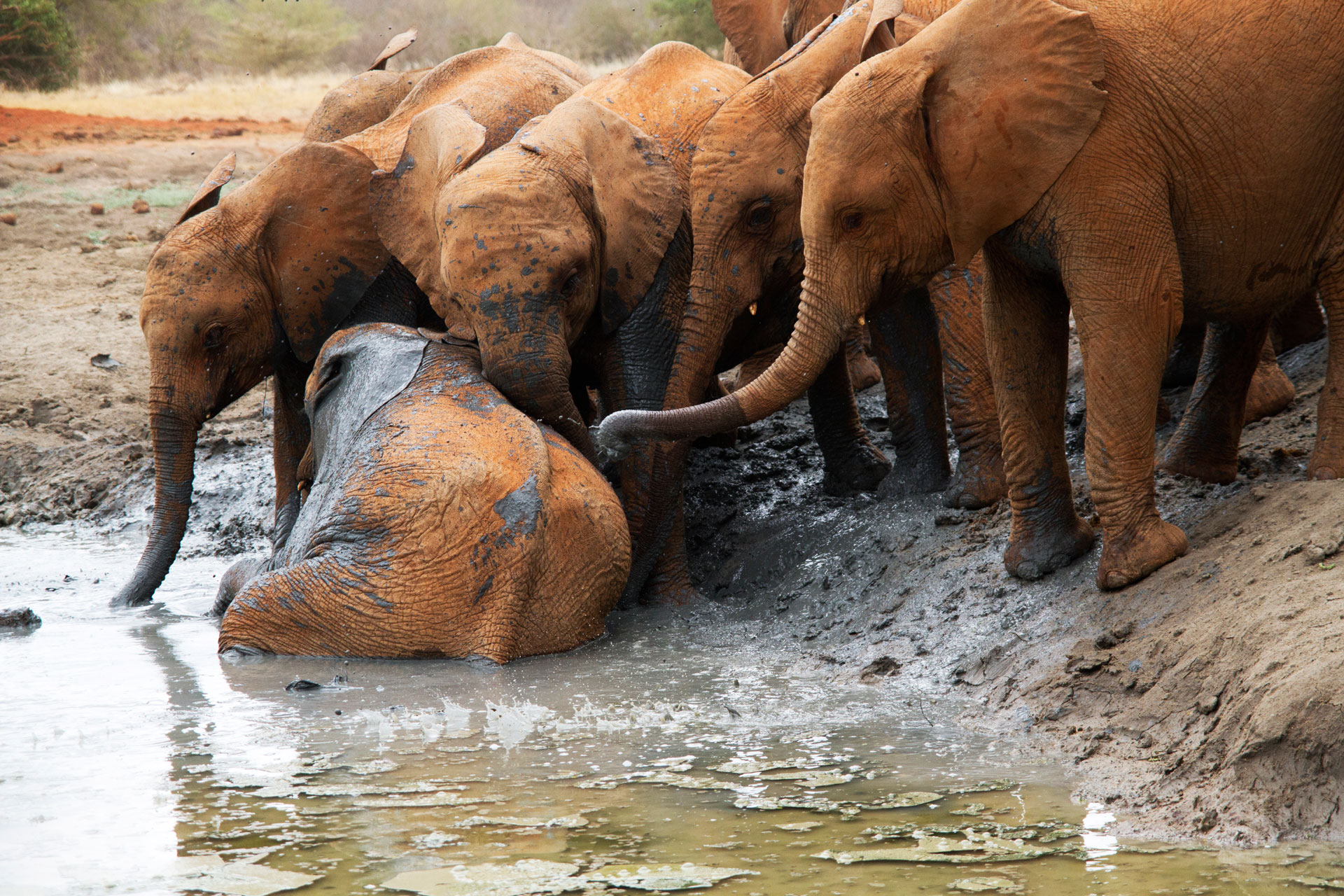 Ste Luce is a beautiful village made up of three hamlets situated in the southeast region of Madagascar. This is where, after three long flights, an overnight stay in Antananarivo (the capital of Madagascar), another overnight stay in the town of Fort Dauphin and a three hour bumpy ride in a camion, I arrived and quickly set up camp for four of the best weeks of my life. 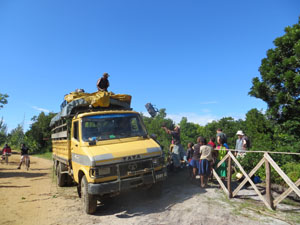 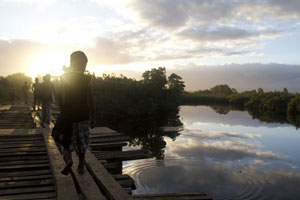 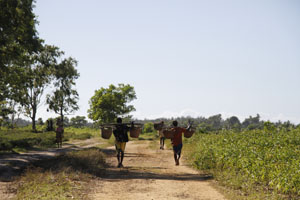 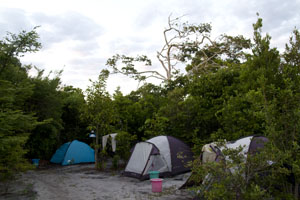 I was volunteering for Azafady, a charity which aims to “eradicate poverty, suffering and environmental damage in Madagascar”.  I was surrounded by a team of 5 other volunteers, two long-term volunteers, 3 guides from Fort Dauphin and 4 local guides.  We were lucky enough to be staying in Ambandrika (which is one of the three hamlets that make up Ste Luce), right next to several fragments of littoral forest where we would spend time carrying out research. 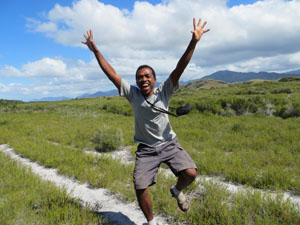 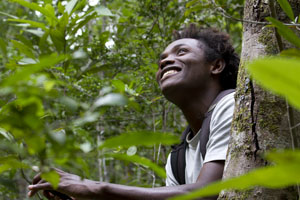 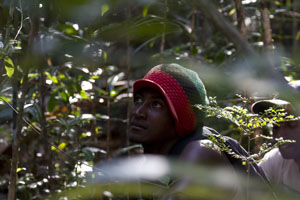 It didn’t take long for us to settle into the routine, this is what an average day might consist of:

6 am: Wake up to the sound of chickens pecking and scratching outside your tent.

6:15 am: Collect water from the well for washing up.

6:30 am: Breakfast consisting for me of rice, banana and honey.

8 am: Set off into the forest to carry out a Lemur transect. This is where you walk a designated transect line looking for Brown Lemurs during the day time and Mouse Lemurs, Fat Tailed Dwarf Lemurs and Woolly Lemurs on night transects.

12 pm:  Lunch of rice and beans and then time to relax or do some washing.

2pm: Time to go out into the forest again, maybe this time for Lemur behaviour where you follow the local guides to find Brown Lemurs. Once you have found them you stay with them for an hour and a half and record their behaviour. When they are sleeping in the trees it is a very relaxing job and we can just sit and watch them. However if they are moving through the forest we have our work cut out trying to keep up!

6 pm: Dinner of rice and beans.

7 pm: Head out into the forest again, this time with our trusty head torches, for a herp transect. This is where we spread out in a line along the transect and move through the forest with our sticks that we use to brush leaves away, searching for herp species such as frogs and lizards. 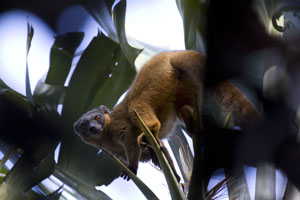 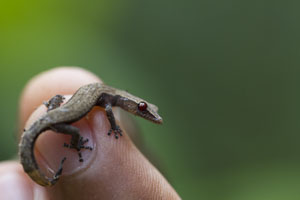 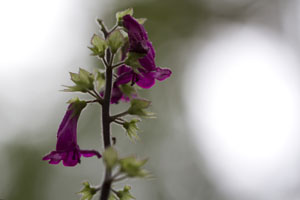 Ste Luce is home to some critically endangered species such as Dipsis saintelucei palm, Beccariophoenix madagascariensis palm and Phelsuma antanosy gecko. Some of the species found here are endemic to this area so the research carried out is critical to their survival. 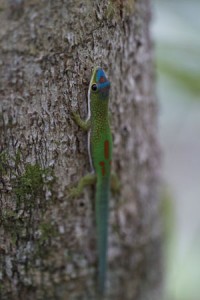 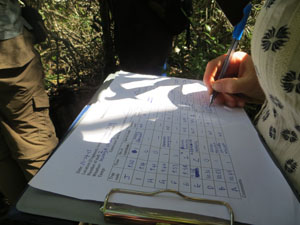 We were lucky enough to help out with some of the environmental education classes, which were great fun! Hoby, one of our guides, wrote songs that the children would sing with much enthusiasm at the start of every lesson. 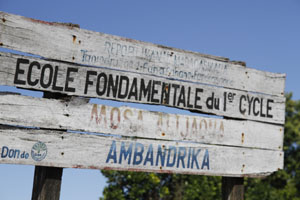 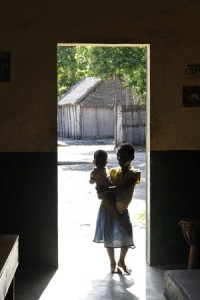 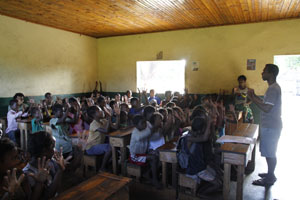 I was also able to help Azafady make a film that they would show to the local community on World Environment Day. We filmed some of the groups that have been set up by Azafady and the local community itself to help protect the environment. This gave me a great insight into the exciting work that is being carried out by the community. 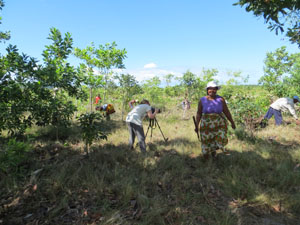 On our last full week we were lucky enough to pack up the whole camp and move it to an even more remote fragment of forest.  To get there we had to walk and cram into a pirogue, which is a local canoe-type boat. The camp here was right on the edge of the forest and consisted of two tiny “Longhouses”, one was the kitchen and the other was where we ate all of our meals. We all set up our tents nestled into the forest. We got up early in the morning to see the sunrise over the crocodile infested river that we arrived on.  The main reason for visiting this particular fragment of forest was to collect the seeds from the rare Beccariopheonix madagascariensis palm. We managed to get stuck in several swamps whilst on this mission but the seeds arrived safely back at the nursery in Ste Luce to be planted and cultivated. 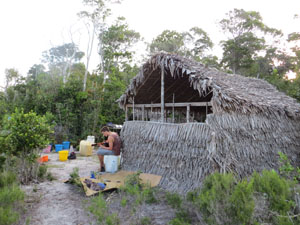 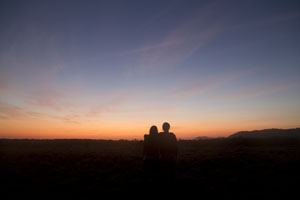 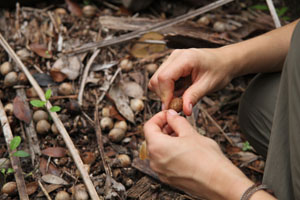 Arriving back in Ste Luce felt like arriving home. We enjoyed our last few days of trekking through the forest and teaching the children before a very sad farewell. Lots of the local community came to wave us off as we loaded the camion for another bumpy ride back to Fort Dauphin. 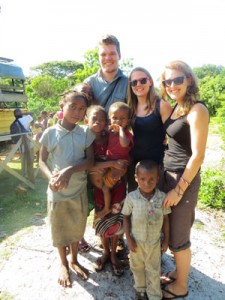 Once back in Fort Dauphin a few of us were lucky enough to join Hoby, one of our guides, on a trip to the area he grew up in known as the spiny forest region. Here we visited Berenty and got to see new species of Lemur including the Ring-Tailed and the famous dancing Sifakas. From here I travelled north back to the capital and on to Andasibe , which is about three hours west of Antananarivo. It was here that I was able to spot the Indri, the world’s largest Lemur, and hear their eerie calls. We were also able to see Golden Sifakas alongside other Lemurs. 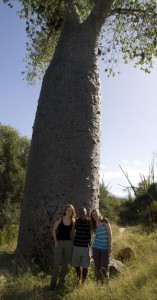 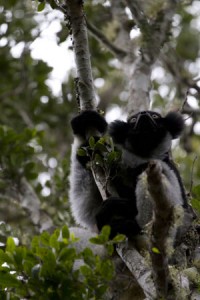 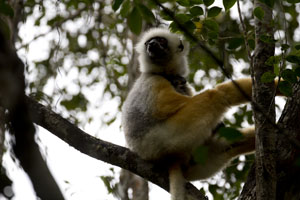 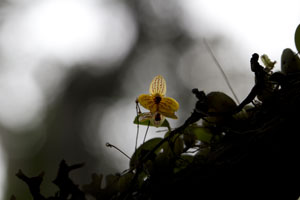 Madagascar really captured my heart, I was incredibly lucky to be able to see some of the many species endemic to Madagascar and make some lifelong friends along the way. 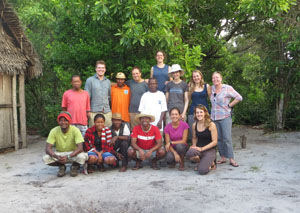 Less than two weeks to go! 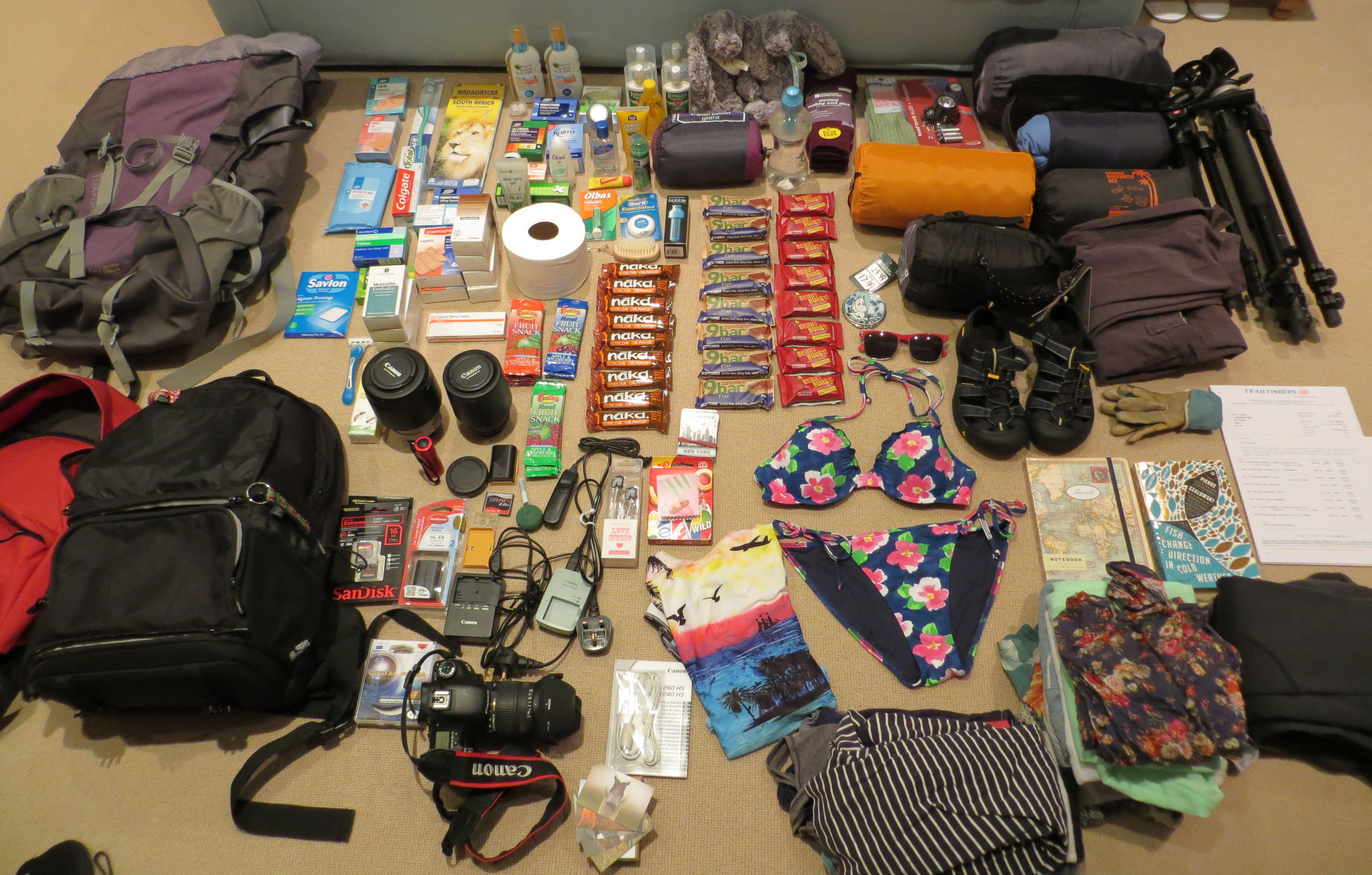 It is now less than two weeks before I embark on what I am sure will be an amazing, eye opening adventure to Africa. Today is my last day of work which is both sad and exciting. I have spent the past few months raising money, researching, booking and planning to enable me to see as much as of the countries I visit as possible.  So here is an outline of my trip:

On 3rd April 2013 I will fly to Antananarivo the capital of Madagascar where I will spend one night before flying down to the south of the island on 5th April. Many people aren’t aware of how vast Madagascar is; to give you an idea it is the 4th largest island in the world. I will be spending a month volunteering here with Azafady, an award winning charity that works with local people to help alleviate poverty and help to conserve unique and biologically rich endangered forest environments in the region.

Once I have finished my month of volunteering I will travel back to Antananarivo. I then have two weeks to explore Madagascar, during these two weeks I hope to visit the Indri, the world’s largest Lemur, and possibly travel to see the famous Baobabs or to one of the islands off the coast of Madagascar.

My next stop is Arusha, Tanzania where I will be staying for two days before embarking on a safari. I am extremely excited about this part of the trip as I will hopefully get to see lots of wildlife. I will be traveling to the Tarangire, Lake Manyara, Serengeti and Ngorongoro Crater before returning to Arusha. I will then fly to the island of Zanzibar to get lost in Stone Town, hopefully see some turtles and monkeys and of course enjoy the beautiful beaches.

Departing Zanzibar I will say a sad farewell to my trusty traveling companion Hannah and hop on a flight to Cape Town South Africa. Here I will spend six weeks with The Expedition Project as their photographer and film-maker. My aim is to document the trip as we do a huge loop around South Africa visiting community and conservation projects.

After six weeks in South Africa I will head home from Port Elizabeth with a rucksack bursting with presents and a camera full of photographs and footage. I will update my blog as much as possible to let you know my progress so please keep checking the website. For now I will leave you with a photograph of the stuff I need to take (bare in mind this isn’t everything and it all needs to fit in my purple backpack and my camera bag!)

I hope you enjoy my future posts, thank you for reading!

Welcome to my blog.

Here is where I will be posting news on my current projects and plans for my exciting trip to Madagascar, Tanzania and South Africa in April.

Would be great to hear any feedback on my brand new website so feel free to get in touch.

I hope you enjoy!